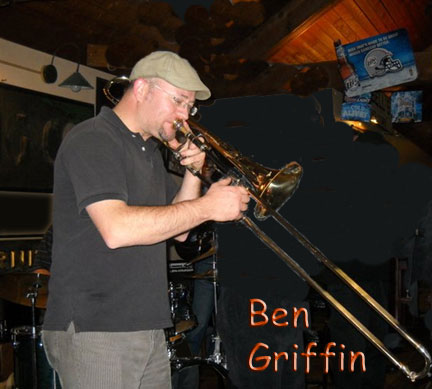 Ben Griffin earned a Bachelor of Music degree in Jazz Performance at the Manhattan School of Music. From 1999 to 2001 Ben was a featured soloist in the original cast of Blast!, which won a Tony Award in 2001 for Best Theatrical Event. (If you saw the televised version you may recall seeing Ben ride across the stage on a tall unicycle while playing his trombone!) From 2005 to 2010 he was assistant principal trombonist in the Coast Guard band. He has performed in myriad ensembles in the jazz world, including the Vanguard Orchestra, the Mingus Big Band, the Tommy Dorsey Orchestra, the Cab Calloway Orchestra, the Bobby Sinabria Big Band, the Birdland Big Band, the Galvanized Jazz Band, the Sherisse Rogers Big Band, Joe Bataglia and the New York Big Band, and many more. Commercially, Ben has performed with Frankie Valli, Darlene Love, Nancy Wilson, Keely Smith, Isaac Hayes, Lou Christie, Jerry Vivino, and has appeared on the Today Show and on Late Night with Conan O'Brien. Now residing in Hartford, Mr. Griffin remains an active freelance musician.