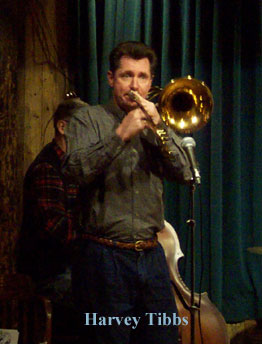 Harvey Tibbs was a member of West Point’s Jazz Knights trombone section from 1984 until 2006. Originally from Richmond, Virginia, he received his Bachelor of Music from West Virginia University. During his 22-year career at West Point, Sgt. 1st Class Tibbs performed with such legends as Tony Bennett and Louis Bellson. Renowned as a specialist in traditional jazz and swing styles, he is the leader and arranger of the Hudson Valley Swing Band, an eight-piece ensemble that has been performing throughout the Tri-State Area since 1993. He has appeared with the Galvanized Jazz Band, the Gully Low Jazz Band, the Buck Clayton Orchestra and Vince Giordano's Nighthawks. Sgt. 1st Class Tibbs continues to perform regularly with Barry Bryson's Swing Street, the Tony Corbiscello Orchestra and Tom Artin's Tomcats. His Broadway show credits include 42nd Street and Chicago. In addition to numerous Jazz Knights recordings, Harvey can be heard on the award-winning centennial tribute to Bix Beiderbecke, Celebrating Bix (Arbors Jazz). Since his retirement from West Point he has continued to freelance in the New York City area.