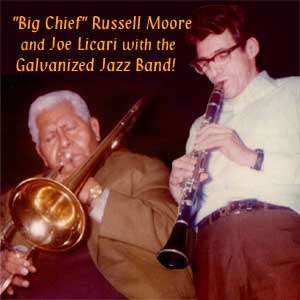 Russell Moore, affectionately known as "The Chief", was born in 1912 on a remote Pima Indian reservation in Arizona. As a young boy he was sent to live with his uncle in Illinois, where he first encountered classical music and jazz. As a teenager he frequented Chicago jazz clubs; by the mid-1930s Moore had become a major jazz artist. By the early 1960s he had recorded and toured with Sidney Bechet, Billie Holiday and Louis Armstrong. During the 1970s Moore was a frequent guest of the Galvanized Jazz Band in Connecticut. His powerful vocal renditions of such classics as "Black and Blue", "Some Day", and "How Long" are unforgettable. Also included on this CD is his trademark version of "You're So Ugly". Originally composed by Clarence Williams as "You're Some Pretty Doll", this number was given a new lease on life by New Orleans trombonist George Brunis when he popularized the present lyrics. Although Brunis always claimed to be the author, that was disputed by New Orleans guitarist Lemon Nash. Moore often drove from his home in Nyack (NY) with clarinetist-author Joe Licari. In his autobiography (The Invisible Clarinetist) Joe recounts many tales of his adventures with "The Chief". On one of his last visits to the Millpond (3/22/80) Moore brought the legendary Jabbo Smith along for company; Jabbo kindly autographed my bass on that date. With the exception of "Rosetta" (featuring Bill Lezotte ) all of the vocals on this CD are by Russell Moore. Drummer Ed Stockmal worked regularly with the GJB for a few years during the 1970s; now he can be seen and heard at jazz festivals with the Bearcats Jazz Band. The Chief passed away in 1983, at the age of 71; we had the honor of performing at his memorial service in Manhattan along with Dick Wellstood and many other members of the NY jazz community. We hope you enjoy the brief glimpse of the past offered by this recording. (No longer available)