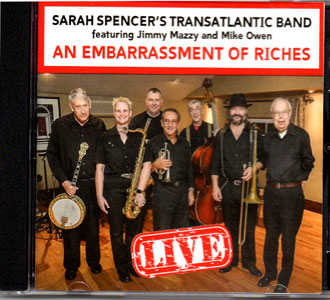 Sarah Spencer is well-known on both sides of the Atlantic as a long-time devotee of New Orleans Jazz. Originally from London, she spent many years in Connecticut, often performing with the GJB at the Millpond Taverne and the ChowderPot and touring with the Chicago Hot Six as well as her own Transatlantic Band. In October of 2015 she put together an all-star group for two concerts in Rochester, NY for the Flower City Jazz Society. She chose to include Fred Vigorito, Bill Sinclair and Art Hovey (from the GJB) along with Tom Palinko and Jimmy Mazzy (often guests with the GJB) and special guest Mike Owen, an amazing trombonist from the UK. This CD, aptly titled An Embarassment of Riches (SJSTB 28), is a live recording of selections from those concerts. When Sarah produced it she was planning to set up future Transatlantic tours, but then it became necessary for her to return to London for a few years where she has been performing quite a bit. (See Sarah's You-Tube Page for video examples of her recent work.) Meanwhile the Rochester CDs have remained here with us, awaiting her return. Since the 2020 pandemic has forced all performances to be put on hold Sarah has chosen to utilize Fred Vigorito's marketing skills to make these CDS available to jazz fans everywhere. To hear slightly abridged sample tracks in MP3 format, click on Sister Kate or Red Wing in the tune list below:

Get Out of Here and Go On Home
Mama's Gone, Goodbye
The Laughing Samba
Love Songs of the Nile
Down in Honky-Tonky Town
I Wish I could Shimmy Like My Sister Kate
We'll Meet Again
Goin' Home
Second Line
Big Lip Blues
Red Wing
'Til We Meet Again