The conventional four-valve systemdescribed previously is pretty good except for the 6th, 7th, and 9-11 semitones. We can solve at least one of those "problem" notes by adding a 5th valve.

Perhaps it would be foolish to make the 5th tubing so long that it can be used only for the 9th, 10th, or 11th semitone. If we are going to have a 5th valve then we should plan to use it more than once a year. So let's plan to use it mainly for the 6th and 7th semitones and hope that it will turn out to be useful for the other problem notes as well. That leaves us with only 32 possible choices.

A graphical shortcut enables us to shorten the list of choices considerably. Although not as precise as a spreadsheet, this method makes multi-valve fingerings easy to see and understand. Of course one must remember that real tubas have individual quirks of intonation which cause them to differ from the mathematical model described here. This model is only a starting point for understanding your instrument. It is also very useful for discovering alternate fingerings.

The graph of this equation is a straight line with negative slope, intersecting the axes at X = T and at Y = T. There is one such diagonal line for each note of the chromatic scale, because each note has its own "T" value. For now we need to consider only the ones corresponding to "problem" notes. They are drawn in red in Mark Wiseman's excellent version of the graph, below. The horizontal and vertical axes of this graph are calibrated as decimal fractions of the horn's overall effective length, or "Lo".

The diagonal lines originate from points on the X-axis which correspond to notes in the equal-tempered chromatic scale. For example, the diagonal labeled "T6" originates from 0.414 on the Y-axis and ends at 0.414 on the X-axis, because the valve tubing length needed for the sixth semitone (augmented 4th) is S6 × Lo - Lo, which comes out to approximately 0.414 Lo.

Example 1: Look at the place where the vertical line labeled "(4)" intersects the horizontal line labeled "T6". The height of that spot above the X-axis is approximately 0.0794 Lo, because S6 - S5 = 0.0794. (Remember that "S" represents the "semitone ratio", or the 12th root of 2.) That turns out to be about one and one-third times the length of the second-valve tubing, or "1.33 L2". (This is the fifth valve that was invented and patented in 1835 by Wieprecht and Moritz.) Using that length for your 5th valve tubing enables you to get a good 6th semitone (augmented 4th) fingered with the 4th & 5th valves. Furthermore, if you follow the horizontal line labeled “long half-step” to the right from that point you find another circled point where the “T9” diagonal intersects the "(234)" vertical. That tells you that the same 5th valve tubing with valves 2, 3, & 4 will give you an accurate 9th semitone. We see that a "long semitone fifth valve" is good for the 6th and 9th semitones and may be usable for the 10th, but not much help for the other problem notes such as the 7th, 11th and 12th semitones. This system may also be useful for creating alternate fingerings to deal with high notes that have intonation problems. Using "+" to indicate a needed slide pull and "-" to indicate a needed slide push, the chromatic scale then looks like this:

(The four columns under "note names" are for instruments in keys of BBb, CC, Eb, and F, respectively.) 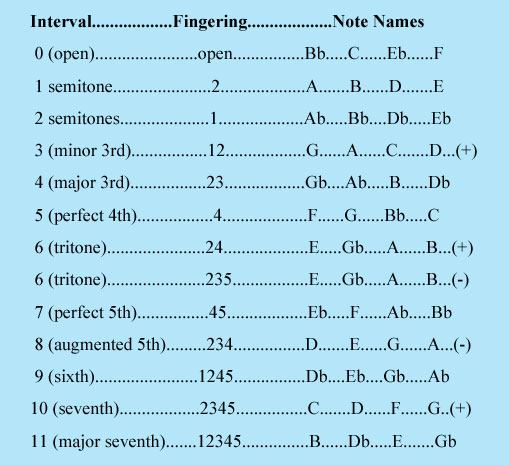 (Again, the four columns under "note names" are for instruments in keys of BBb, CC, Eb, and F, respectively.)

If you tune the 5th valve for the 7th semitone fingered 45 (as in the chart above) then the sixth semitone will be a bit flat when fingered 235. Shortening the third valve tubing a bit will partially correct that problem, leaving the 23 combination a bit sharp. The chart suggests that you could also tune the 5th valve for the 6th semitone fingered 235, but then the 7th, 9th and 11th semitones would be a bit sharp. That might be acceptable because it’s usually easier to lip down than up in the extreme low register. Again, this type of 5th valve may give many alternate fingerings for correcting intonation of problem notes in the high register. More discussion of that subject will appear later.

Example 3:
The next horizontal line is labeled "short major 3rd", sometimes known as the "Mirafone System" or "two whole-step". It hits the Y-axis at roughly 0.2323 Lo, or about 3.9 L2. If we tune the 6th semitone fingered 125 then

Because of the length of tubing involved, this type of 5th valve will be somewhat less useful for alternate fingerings in the upper register. But it does give an unusually good extension register, with the eighth and ninth semitones only a tiny bit flat and a sharp but usable alternative to the pedal note.

The possibilities and limitations of other 5th-valve systems such as the long fourth, tritone, and quint can also be seen easily on the chart. A fifth valve tuned to a "long 4th" gives you good fingerings for T6, T9, T11, and T12, but is no help for T7, T8, and T10. The Gronitz "tritone" valve offers possible fingerings for every note, but with considerable variations in pitch. A "quint" valve (tuned to a perfect 5th) gives good fingerings for T7, T9, and T11.

Another approach which is popular in Europe but strongly opposed by Roberts is to tune the third valve to be used alone as a substitute for 1 & 2. To see an investigation of this system click on "short third valve".

Back to the main page of the Tuba Logic website: