Packing A Big Tuba for Shipment... 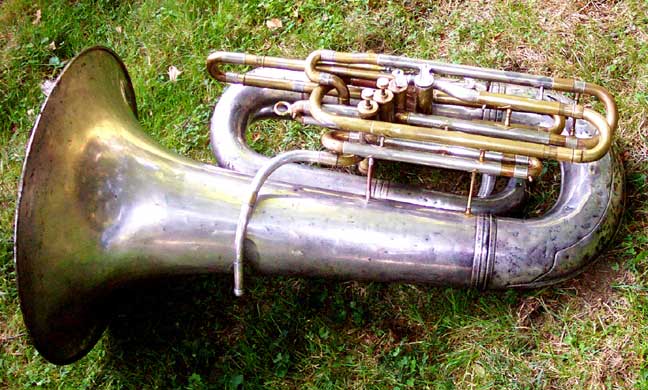 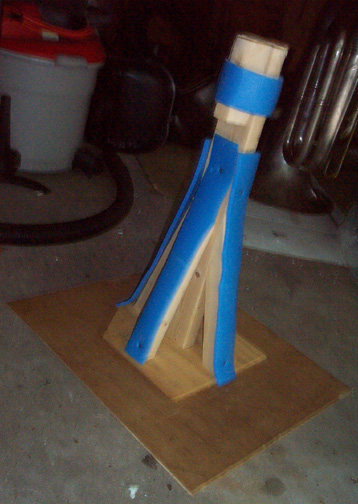 I had hoped to sell it locally to avoid the risk of shipping damage, but that didn't happen. I have seen enough examples of shipping damage due to poor packaging to know that special care would be needed for this beast. I chose to minimize the box size without leaving the tuba too exposed to damage because for a package this big, the shipping cost is determined primarily by the box dimensions, rather than the weight.

Most tubas are damaged in shipping because they are dropped on the bell. No amount of bubble wrap or plastic peanuts can protect a large tuba from this kind of indignity. Sticking a basketball into the bell can be helpful, but that still does not protect the bell from side impacts. Thinking that something like a large tuba mute might be more effective, I constructed the bell insert pictured at the right. It is made from scraps of plywood and some 2x4's ripped in half. The blue material is plastic foam insulation about half an inch thick.

When the tuba is placed over this insert it is supported so that the bell rim is some distance off the floor and touches nothing. (Next time I will increase that distance to a couple of inches to allow for compression of the foam.)


Another common form of shipping damage is flattening of the bottom bow due to dropping the box on the bottom end. Foam peanuts just get pushed to the side when that happens, and bubble wrap gets popped. To avoid that kind of damage I made a box to enclose the lower bow of the tuba and lined it with plastic foam: 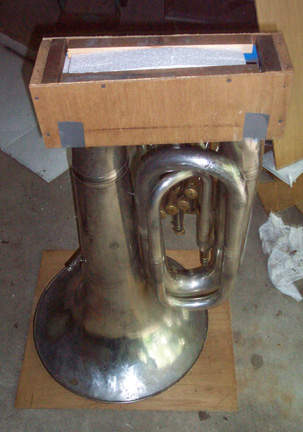 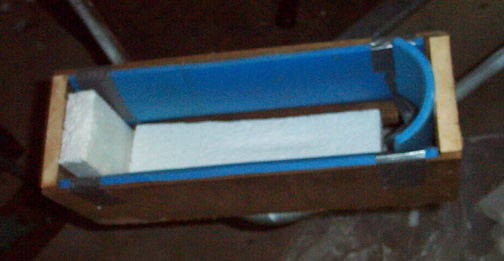 When the tuba is fully packed it should be supported entirely by that box and the bell insert so that no pressure is applied to the valve tubing or bell rim.
The box is attached to another thin plywood end plate, like the one on the bell insert. I used drywall screws to connect all of the wooden pieces in this project. Wooden struts are then installed, connecting the two end plates:

Finally, the entire framework was covered with heavy corrugated cardboard. The package weighed 60 pounds, but they charged me for 90 because of the size. I obtained a very reasonable shipping cost estimate from the DHL website, which also directed me to a nearby dropoff place. When I took it to that store, however, I was given a price that was $30 higher than the one given by the DHL website. The man at the store could not explain the difference. The total was still less than what UPS would have charged me, so I payed the fee and sent it off. Tracking the package during shipment was very easy, using the DHL website and the tracking number. I am happy to report that the tuba arrived at its destination on schedule and in one piece.

Back to the Tuba-Logic Index Page