Dear whoever may be able to help, I have a quick question concerning the different types of tubas. I am new to the tuba and would like to ask is their a difference between a BBb tuba and Bb tuba and if so what is the difference? Also maybe you could enlighten me briefly on the tuba if possible. -Allison-

Strictly speaking, a tuba "in Bb" (as opposed to "BBb") would be a tenor tuba. But in the USA we call such an instrument a "baritone horn". (If it is played really well then we call it a "euphonium".) Since nobody actually speaks strictly, there is no difference between a "Bb" and a "BBb" tuba in colloquial usage. I don't know of any conductor or composer of brass music who would ask for "Bb tuba" if he/she really wanted a euphonium. 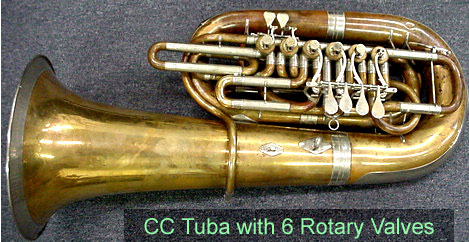 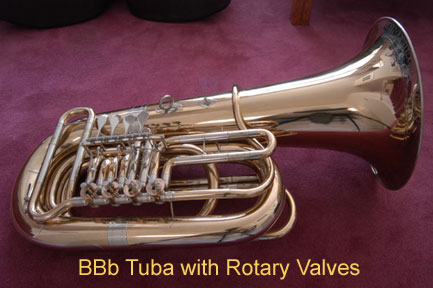 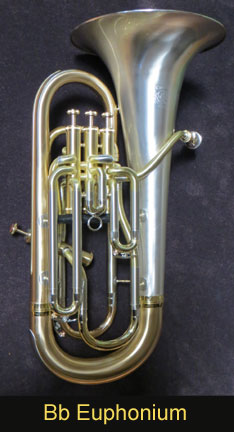 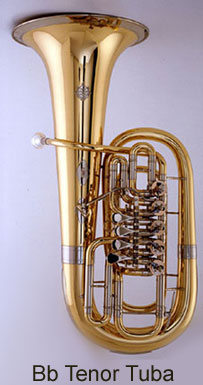 Tubas enjoy more diversity than any other instrument that I know of. In the USA the most common key is "double-B-flat", pitched an octave below a trombone. In most symphony orchestras you will find "double C" tubas, pitched a whole step higher. A century ago tubas in E-flat were very common, pitched a perfect fifth below the trombone. Some fine soloists are using them today, and they are still widely used in british-style brass bands. For solo work and some symphonic parts with a lot of high notes there are also "F" tubas, pitched a fourth below the trombone. (An F tuba's open tones are actually the same as those of a French horn.)

Tubas in each of those keys can be found with three, four, five, six, or even seven valves. The smaller tubas in Eb and F are sometimes called "bass tubas"; the big tubas in BBb and CC are then called "contrabass" tubas. Sheet music for bass and contrabass tubas is always written in bass clef, not transposed, except in european brass bands.


"Tenor" tubas in Bb or C are more commonly called euphoniums, as explained above. In brass bands one often finds Eb alto horns (also known as "peck-horns") which can also be called alto tubas. Finally, what we now call a "flugelhorn" is really just a soprano tuba, pitched the same as a Bb trumpet.

British-style "top-action" tubas which have vertical pistons are played with bell leaning to the player's right. They are direct descendants of 19th-century "saxhorns". Sometimes the fourth and/or fifth valve is on the side, played by the left hand. These tubas can be found in all four keys, with both upright and recording bells. Sometimes these instruments have "compensating valves", which correct certain intonation problems. 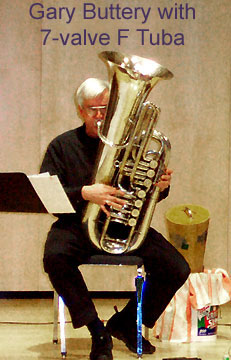 German-style "rotary-valve" tubas are played with the bell leaning to the player's left, with the right hand working the valve levers in the front of the instrument. The lever mechanism turns rotors to direct the air flow. Sometimes extra valves are operated with the left hand or with the right thumb. These tubas can also be found in all four keys, with both upright and recording bells, and three to seven valves. (The photo at the right shows Gary Buttery with his beautiful seven-valve tuba in F.)

Today most tubas are made with straight upright bells, as in the photos above. But from the 1920s through the 1950s "recording bells", bent forward to project sound into primitive recording equipment, were very popular in the USA. Tubas with recording bells usually last longer in schools because they can only lie flat on the floor when not in use. Students tend to stand upright-bell instruments on their bells; when done in haste that results in a smashed bell. 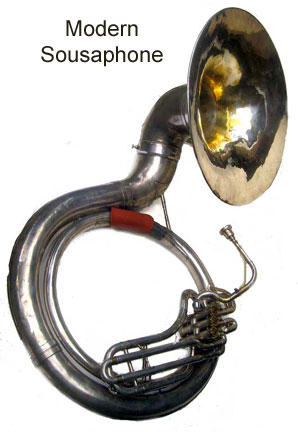 Tubas with front-action piston valves,as in the image above, were developed in the USA to combine the simplicity and reliability of pistons with the comfort and balance of front action. Three and four valves are common on these instruments. If there is a fifth valve it is usually a rotary valve operated with the right thumb. These tubas can also be found in all four keys, with both upright and recording bells.

Sousaphones, commonly seen in marching bands in the USA, are also members of the tuba family. They are just tubas rearranged to be carried easily. They are usually in BBb and sometimes in Eb. Most sousaphones have three valves, but some have four. They usually have pistons, but some have rotary valves. Since the early 1960s several companiess have been selling sousaphones made of fiberglass or plastic instead of the customary brass. (The smaller tubing and valve sections of these instruments are still made of brass.) Fiberglass and plastic sousaphones are much lighter than brass, and they can be made in many different colors. Naturally, they have a different "feel", but that does not make them better or worse than brass sousaphones. The Martin company made an upright recording-bell fiberglass tuba for a brief period, just before going belly-up. For a few recent years a company in Germany marketed fiberglass upright rotary-valve tubas similar to Mirafones, and there are plastic "Cool-Wind" tubas on the market now that used to be called "Tigers". 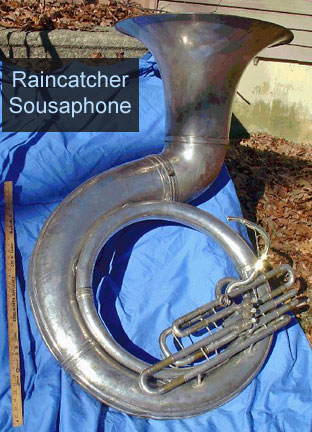 Sousaphones are descendants of "helicons", which were commonly used a century ago in cavalry bands. They are just straight-belled tubas arranged to wrap around the player's body and rest on the left shoulder. John Philip Sousa did not like the fact that a helicon bell points sideways, so he had some helicons custom-built with a bend to direct the bell straight up because he preferred the indirect sound that diffracts out to sides from a tuba bell, which is mellower than the sound that comes straight out of the bell. (See catalog illustration, below.) Those instruments are the only true "sousaphones", but they became known as "raincatchers" instead. It seems likely that Sousa would detest the bell-front sousaphones used in marching bands today. 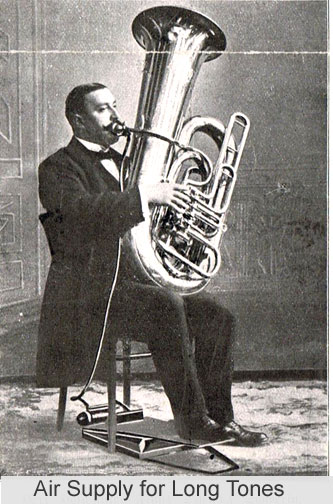 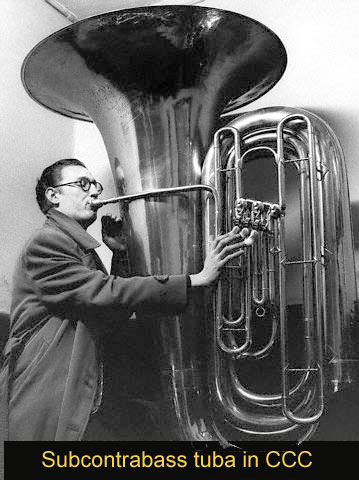 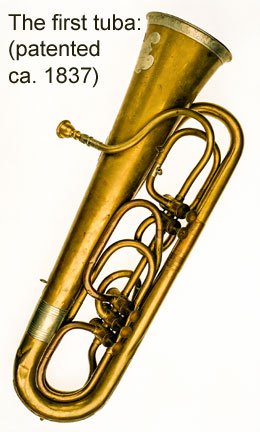 Back to the Tuba-Logic Page

To the History page: