The old Martin that I fixed up plays like a dream but it's too heavy to rest on my lap for long periods of time. Because of its detachable bell I could not raise the leadpipe enough to allow the instrument to rest on the chair while playing. For a time I carried a ball of socks to rest it on. That worked well, but it was just one more thing to worry about misplacing.

So I decided to make an adjustable support that would be attached to the instrument but easily removable. I cut a piece of 2x4 (wood) to fit against the two lower bows of the tuba, making the rough cuts with a saber saw and then adjusting the notches with a wood rasp. Rather than attaching it with bolts and wing nuts, which might possibly crush the tubing, I chose to lash it on with heavy string. For added protection and extra friction I placed a sheet of rubber shelving material between the wood and the tuba. I drilled a hole about 6" deep to accomodate a threaded rod, and used epoxy to cement a nut into the open (lower) end of the hole so that the rod could easily be screwed in or out. I put a rubber stopper from a chem lab over the end of the rod, and a rubber cane tip over the stopper to protect the chair. 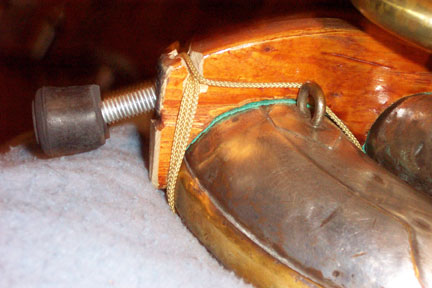 At first the assembly tended to slip around the bows toward the smaller end in spite of my efforts to lash it securely; I solved that problem by soldering a strap ring onto the bow for the block to rest against. Since then it hasn't budged. The ring is visible in the photos above and below.

It is important for the support to be positioned so that the tuba is balanced so that minimal effort is required to hold in in playing position. During long rehearsals I find that an occasional small height adjustment helps me to avoid fatigue. I am sure that a real craftsman could find a way to make a better-looking support, but this one does the job for me.

Back to the main page of the Tuba Logic Website: