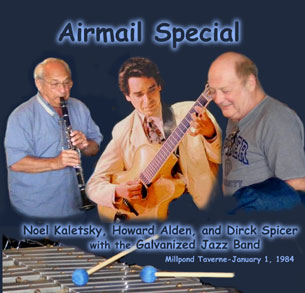 GJB 1/1/84 (released 11/29/07) is a gem from the GJB archives. Recorded at the Millpond Taverne on January 1, 1984, it features Noel Kaletsky at his best, with Dirck Spicer on vibraphone and Howard Alden on guitar, along with Fred, Bill, Bob, and Art. As a native of New Haven, Noel Kaletsky needs no introduction to New England Jazz fans. In recent years his work with festival bands has earned him considerable respect all over the country. When Noel and the GJB began their legendary 25 years of Sundays at the Millpond Taverne back in 1971 a piano & bass duo was working there already on Saturday nights. It turned out that Dirck Spicer, the bassist in that group, could also play vibes in the style of Lionel Hampton. Needless to say, Noel and Dirck hit it off rather well; Dirck was soon added to the GJB's list of frequent guest artists. Howard Alden first came east from California in 1979 for a summer in Atlantic City with Red Norvo. Upon moving to New York City in 1982, Alden's skills were quickly recognized and sought for appearances and recordings with such artists as Joe Bushkin, Ruby Braff, Joe Williams and Woody Herman, as well as the Galvanized Jazz Band. The opportunity to bring both Dirck and Howard to the Millpond for their one and only session together with Noel and the GJB finally arrived on New Year’s Day in 1984. This recording of the evening’s festivities was only recently rediscovered in the GJB archives; we think you will agree that it has stood the test of time rather well. To download a sample track in MP3 format click on "Crazy Rhythm" in the tune list below: