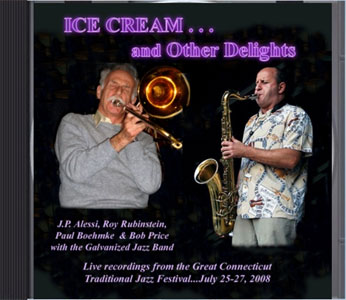 GJB 7/25/08 was recorded in performance at the Great Connecticut Traditional Jazz Festival, July 25 -27, 2008, in Moodus, CT. This was the last time that the festival could be at the beautiful Sunrise Resort in Moodus. (Fortunately, a new location was found for the following year.) Jean-Pierre Alessi, leader and founder of the French Preservation New Orleans Jazz Band, made his first visit to Connecticut to join us on tenor sax. In order to bring just the right New Orleans flavor to the band we asked Roy Rubinstein to fly in from Chicago and join us on trombone, asked Bob Price, the "Banjo Crackerjack", to come in from Florida to play banjo, and asked Paul Boehmke to drive all the way from Trumbull to put the icing on the cake with his Albert-system clarinet. All four guests happily accepted the invitation. Although we had never performed or even rehearsed together as a group, we all knew exactly what kind of music we wanted to make: authentic, traditional New Orleans Jazz! This recording clearly shows how successful the project was. Since we had to rush from one site to another between sets there was very little time to set up and test recording equipment. We set up two good microphones high in front of the band and took what they gave us. As a result we were unable to record Jane Campedelli's marvelous vocals and the piano sounds a bit farther away than we would like, but the band as a whole sounds great. In this style of music it's the ensemble sound that counts, and that's what we got: musical conversation at its best. We hope you enjoy listening to this CD as much as we did producing it.

Note: This CD may not play on older DVD players,
nor will it play in your VCR or toaster.
It works best in CD players.