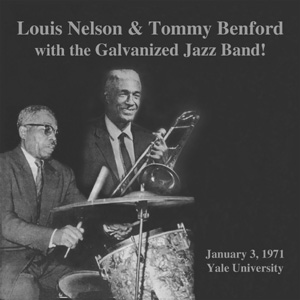 BCD-467, Louis Nelson & Tommy Benford with the GJB: . . . In the autumn of 1970 things were falling into place for the young Galvanized Jazz Band. Bud and Helen Thomas, owners and operators of the Millpond Taverne, were interested in New Orleans style jazz and saw some potential for a band such as ours. Mark Finks persuaded Bud to open with a splash on the first Sunday of January, 1971, with Louis Nelson and Tommy Benford as special guests; he also helped sponsor the recording session for this CD. Louis Nelson (1902-1990) lived his whole life in New Orleans. Starting in the early 1920s he worked with the Original Tuxedo Orchestra, Kid Rena's band, and then with the Sidney Desvigne orchestra; he joined Kid Thomas around 1944. Nelson was a regular at Preservation Hall during the 1960s and 70s, often with Percy Humphrey and Punch Miller. We first met him at a Connecticut Traditional Jazz Society concert with Kid Thomas in 1970. Tommy Benford (1905-1994) was born in West Virginia. Both his father and his older brother were tuba players. Starting in 1913 Benford received extensive musical instruction at the Jenkins Orphanage in South Carolina. By 1914 Tommy was touring with the Orphanage band; they even performed at the Anglo-American Exposition in London. Around 1920 Tommy and his brother Bill started running away from the orphanage to work with minstrel shows, medicine shows, and circus bands. By 1921 he was working at a vaudeville house in Chicago and listening carefully to King Oliver’s great Creole Jazz Band. By 1922 he was in New York working with Fats Waller, Eubie Blake, and others of equal stature; shortly after that he was working steadily with Sidney Bechet and giving drum pointers to Chick Webb. When Jelly Roll Morton came to New York in 1927 it was Bill Benford’s band (with Tommy on drums) that he chose to record with. In subsequent years Django Reinhardt, Lena Horne, Bob Wilber, Rex Stewart, Muggsy Spanier, and many others (including the GJB) had the pleasure of working with Tommy.