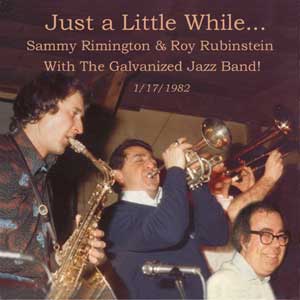 On January 17, 1982 the GJB celebrated its eleventh anniversary of Sunday evening jazz at the Millpond Taverne by bringing together Sammy Rimington (from England) and Roy Rubinstein (from Chicago but originally from England too) to work for the first time anywhere along with Noel Kaletsky and the rest of the GJB. Sammy worked with Noel in the Nutmeg Jazz band in Connecticut for a time around 1965, and strongly influenced the embryonic Galvanized Washboard Band during that period; this occasion was the first of several return visits to Connecticut. We first met Roy Rubinstein around 1970 or 1971 when he was working with Bill Barnes & Joe Ashworth in the "Southampton Dixie Racing & Clambake Society"; he worked with us occasionally during those years before moving from New York to Illinois. We knew that his powerful and pure New Orleans-style trombone work would be a natural match for Sammy. Eight of the tunes on this recording were originally issued on cassette GJB 005, which also featured art work by Natalie Garvin which is reproduced on this CD. The four "bonus tracks", (Burgundy Street Blues, I'm Alone Because I Love You, Bugle Boy March, and Mahogany Hall Stomp) are issued here for the first time. We hope you enjoy this spirited glimpse of our younger days. To download a sample track click on the blue lettering below:

Just A Little While
Lord, Lord, Lord
Make Me a Pallet
Should I Reveal
The Bucket's Got a Hole In It
Lou-Easy-Ann-I-A
Burgundy Street Blues
While We Danced at the Mardi Gras
I'm Alone Because I Love You
Bugle Boy March
Dallas Blues
Mahogany Hall Stomp